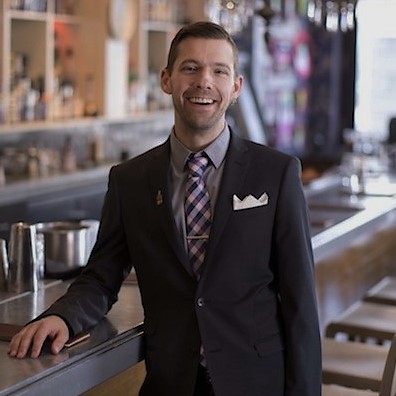 Based out of Seattle, Washington, Jesse Cyr is an award winning bartender. His credentials include being the General Manager of internationally acclaimed bar Rob Roy as well as Head Mixologist at The Charter Hotel by Hilton. Jesse has had the opportunity to work for several global brands creating various menus and cocktails with their spirits. He is also active in the competition scene being a former national finalist in the Woodford Reserve Manhattan Experience, the National Sherry Wine Cocktail Competition, and the Bols Around the World global competition.

Jesse has been featured in numerous publications such as The Seattle Times, Zagat, Thrillist, and Eater as well as being mentioned by Tales of the Cocktail. Also, he has recipes featured in cocktail books such as ‘The One-Bottle Cocktail’ and ‘Batch Cocktails’ by Maggie Hoffman via Ten Speed Press.

After graduating from the intensive BAR 5 Day course in NYC where he had to pass a blind spirits taste test and written essay exam, he solidified his love for Cognac and has since been on a quest to learn more and share his passion with others. When creating menus, he loves to include Cognac cocktails whenever possible. After a trip to France in early 2020 where he got to visit the Charente River Valley and see the production of eau-de-vie, he decided it was time to start putting his thoughts down on paper and Cognac Reverie began.